Spring Drive Caliber 9R86 may well be the world's most accurate spring-driven chronograph. It delivers a precision of ±15 seconds a month, or ±1 second a day and, equally importantly, measures elapsed time not to the nearest fraction of a second but exactly, thanks to the fact that the glide motion hands stop at the very instant that the button is pressed.

The 72 hour power reserve is maintained even if the chronograph is in operation. 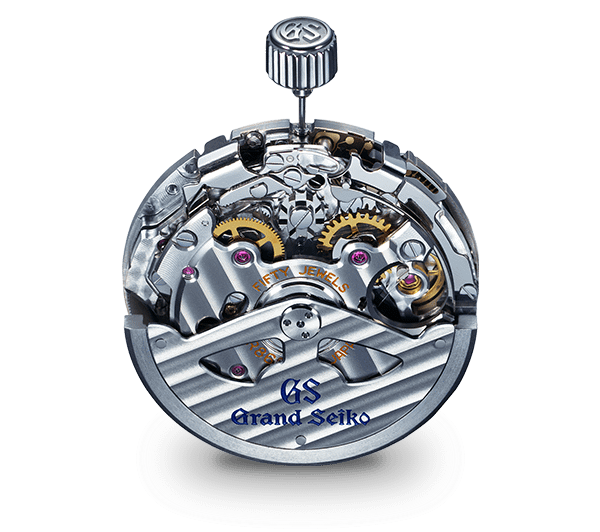 Column wheel system for exact operation of the chronograph

A column wheel system is used to control the starting and stopping of the stopwatch. Its system ensures precise, error free control of the chronograph operation. The column wheel is designed to reduce stress on the clutch and lever, minimizing impact on the movement when the start/stop button is pushed.

The shuddering of the stopwatch that easily occurs with horizontal clutches is eliminated, and timekeeping is more accurate.

Achieving a level of stopwatch accuracy equivalent to the accuracy of the Spring Drive caliber itself would not have meant much if this accuracy were lost in the operation of the stopwatch. To minimize time measurement errors when the chronograph buttons are pressed, the operation of the buttons was made as precise as humanly possible. A two-step READY/START mode was adopted to ensure that the stopwatch operation would be error-free. It is the same mechanism as is used in Seiko’s hand held stopwatches for professional sports use. The chronograph enters READY mode when the push button is lightly pressed. A further press then starts the stopwatch.

Spring Drive, one of the great innovations in modern watch making history, regulates a spring-driven movement with state-of-the-art electronic technology that functions without batteries or other external power source. Its sole power source is a mainspring, which drives a series of gears. A rotor, connected to the end of these gears, generates a small electrical charge that activates an electronic circuit and quartz oscillator. Its accuracy is unprecedented for a watch wound by a mainspring. The development of the 9R Spring Drive movement was possible only because Grand Seiko is one of the few manufacturers with expertise in both mechanical and electronic watches.